The original DocuMaster was produced as a result of a request by one of the Digital Engine Providers.
They had just produced a machine that delivered pre-collated sets (including covers of heavier stock) and wanted Morgana to produce a booklet maker that could finish them without cracking the book’s spine or the highly visible centre page spread.
We made DocuMaster for them and the rest, as they say, is history. 3 versions and over 200 sales later, DocuMaster is the final product to benefit from the Pro treatment.
The DocuMaster Pro has the same SmartScreen module as used by the whole range of Morgana Pro machines and also benefits from the new PosiFeed feeding system making an already impressive feeder, awesome.
Simplicity of operation is key to finishing digitally printed work because run lengths are often short and variable data is becoming increasingly popular. Many of our customers have asked when bindery products will be JDF ready as the pre-press and press products are now mostly compliant and fit within common work-flow processes.
This is why Morgana have made the DocuMaster Pro JDF ready which can now handle variable data books with these.
The amount of variable data documents being produced is increasing month on month. The ability to handle variable data jobs is on most people’s list of requirements when looking for new equipment, even if it is not needed today. 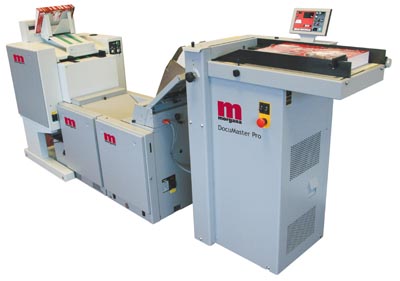